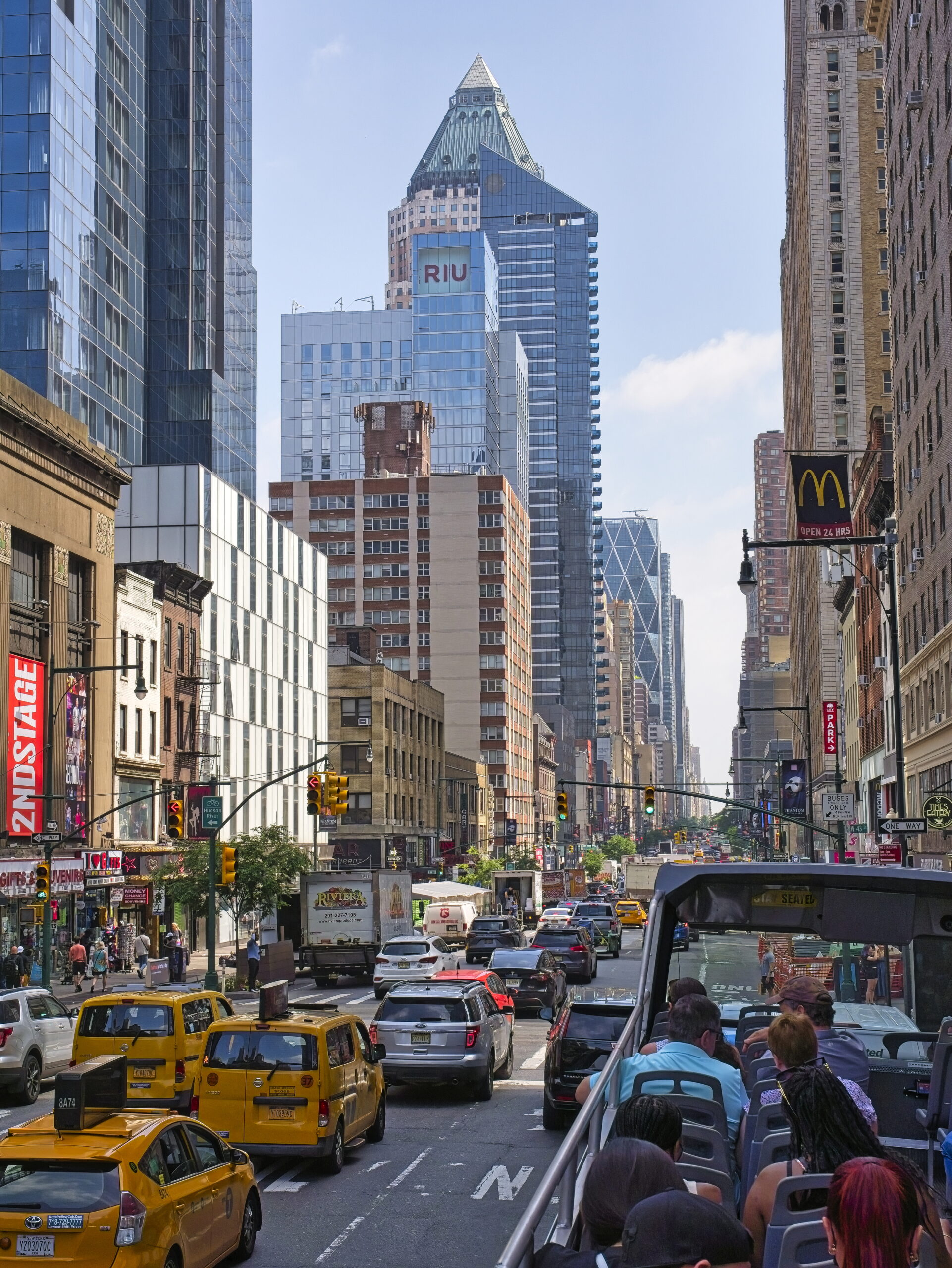 I visited Manhattan in June and decided to tour the city. I had been there a couple times, but never had the opportunity to immerse myself in the city. After speaking to family members about traveling throughout the city, I decided on a bus tour with the company, Top View (by no means is this a sponsor – there’s other companies as well). The Double-Decker bus tour was under $50.

I took an Uber from Central Park to Times Square. It was about $15. I visited Times Square before, but never alone with a curious eye. It was very lively with many tourists. There was a TV show being recorded – I didn’t bother with it. I took some photos of the architecture in the area and walked towards Broadway.

I got on the bus in the Theatre District (Broadway). Unfortunately the bus broke down before the first stop and everyone had to exit to wait for the next bus. The clouds cleared and the sun emerged, making it much hotter. I ducked into Macy’s and changed into shorts.

I got on the next bus and was looking forward to Washington Square Park – to see the “Dosa Man“. Unfortunately, the bus didn’t stop at Washington Square Park and kept going. I was stuck upstairs in the back of the bus. I took the next stop at SoHo. Determined to eat dosa at the park, I got out Google Maps and mapped a way back to the Dosa Man. It was a 20-minute walk North. Well, I was hoping for an immersive experience and I received exactly that!

It was a pleasant walk to the park, but unfortunately, it turned out that the Dosa Man was not working that day. I spoke to a couple locals to get this information. Apparently the Dosa Man posts his updates on instagram, so definitely check before making a trip out there.

I got back on the bus – I had to walk a few blocks, but the stroll was peaceful. Again, if it’s not clear from my writing, I was excited to be exploring NYC!

I stopped in Chinatown to buy a couple hats for the kiddos. I ate at Bodhi, a vegan restaurant. Great reviews, a cute little lunch spot that brings in tons of locals and tourists. I saw the reviews for dumplings but since I was there by myself, I ordered the Vegan Kung Pow. It was delicious with a generous amount of sauce.

Pro tip: Don’t get off at the stop immediately before “Battery Park”. Battery Park is closer to the Statue and there’re ferries available from the park. I don’t know the price differences.

I took some photos of the statue and sat down to have a chilled beer.

The wind in my hair

My back to the city

The lady by the water

Helicopters and planes in the sky

Boats on the water, ferries too

Double-deckers all around town

My pulse with the city

On the way back from Battery Park, the stop was crowded with people. A bus arrived and it was already packed, so hardly anyone was able to get on. I realized I was next to the train station, Bowling Green.

I made a quick call to get some 411 about the subway system back to Central Park. It turned out to be a $3 subway ride.

If I could do it again, I’d start with a subway to China Town – visiting it first, then resume the journey onward to Battery Park. You can see my recommended list below. In fact, the next time I return, I think I’ll do this exact tour.

My recommended tour in Manhattan: